News: Aliens Board Game Scheduled for 2020 (but who knows at this point?)

Well, the latest update from Gale Force Nine (below) means more delays and a new release date of 2020.  There are also promises of expanded content.  After reading the whole release, there’s not much to do other than hunker down and hope it’s a quality game whenever we get our hands on it.

Some reports are starting to come out of Gen Con from people who have played demo versions of Aliens: Another Glorious Day in the Corps.  Enjoy:

I’ve read some unconfirmed reports that claim the recent delays are due to Disney wanting to approve any movie images being used in the game before giving the go-ahead to release it.  Hopefully the upcoming news on September 2nd (see previous update) is that Disney has given their thumbs up and the game is ready to be printed.  In the meantime, here’s a pretty action-packed image of a playtest game in progress at Gen Con:

Here are the latest messages from the Gale Force Nine Facebook page.  The first is a graphic promising more information on September 2nd, 2019.  The second is a message claiming that they can’t share anything prior to that date.  Feel free to speculate on what that means.

“Is this going to be a stand-up fight, sir, or another bug hunt?”

Gale Force 9 recently released a video about some upcoming products.  The segment about Aliens is from approximately 29:00-34:00…

“We’re really making it and it’s coming so don’t worry.”

Here’s a little more info from the GF9 Facebook page that mentions demonstrations of the Aliens board game at Origins as well as a picture of a game in progress.  I think it’s reasonable to conclude that a playable demo at Origins is a good sign that they game may be released in the the near future.  It would be great to get some more info from Origins attendees. 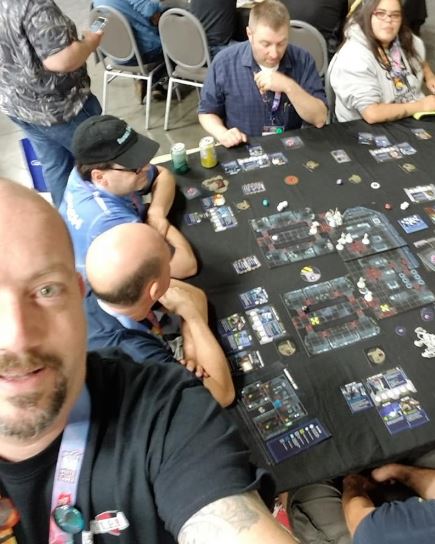 This was recently posted on the Gale Force Nine Facebook page: 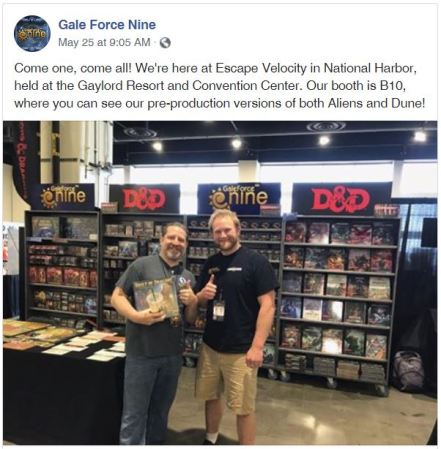 There’s not much to gather from this post other than the mention of a pre-production copy of Aliens.  It’s a little disheartening as I would expect them to have a more finished product if they hope to make their (hopefully???) August release date but I’m not in the business so maybe it’s common for a company to go from pre-production to final copy in 60+ days.  However, as this game’s release has been continually delayed, I wouldn’t be surprised if that happened again.

News on a release date has been hard to find but here’s a recent post from the Gale Force Nine Facebook page indicating that the Aliens board game will debut at Gen Con in August:

Here is a short interview with Gale Force Nine.  The Aliens discussion starts at 4:15.

Here are some takeaways that I noticed:

This is a pretty nice example of the game board that was just released.  I’m trying to decipher some of the cards but it’s been challenging.

Gale Force Nine just released a 2019 teaser video.  Unfortunately, there’s not much information on the Aliens board game.  At the beginning of the video, you can see some game components in the background they’re not discussed at all.  However, you can recognize familiar characters (Hudson, Ripley & Hicks) and cards with familiar lines (In The Pipe Five By Five, Bypass, Game Over Man & M41A Pulse Rifle).

If you watch the video at about 2:05, this is the only comment made about Aliens: “Aliens, a brand new game, will hit the market in the second quarter.”  This falls in line with the estimated May release date in my previous post (see below).

I will continue to post updates as I find them and thanks for reading!

As one of the world’s leading authorities on the upcoming Aliens board game from Gale Force Nine, I am tentatively reporting a release date of May 31, 2019.  This date is purely speculative based on this Amazon listing which appears to be controlled by Gale Force Nine:

I looked for corroborating evidence on the Gale Force Nine website and social media pages but couldn’t find any announcements about a release; so take that as you will.  I welcome Gale Force Nine to contact OiO and clear up any misconceptions.

News on this game continues to be hard to come by but I found this post on the Gale Force Nine Facebook page:

Bummer, I was hoping to be playing this by Christmas.  I think Hudson can best articulate my feelings:

On the bright side, I also found a couple of new pics on their Facebook page: 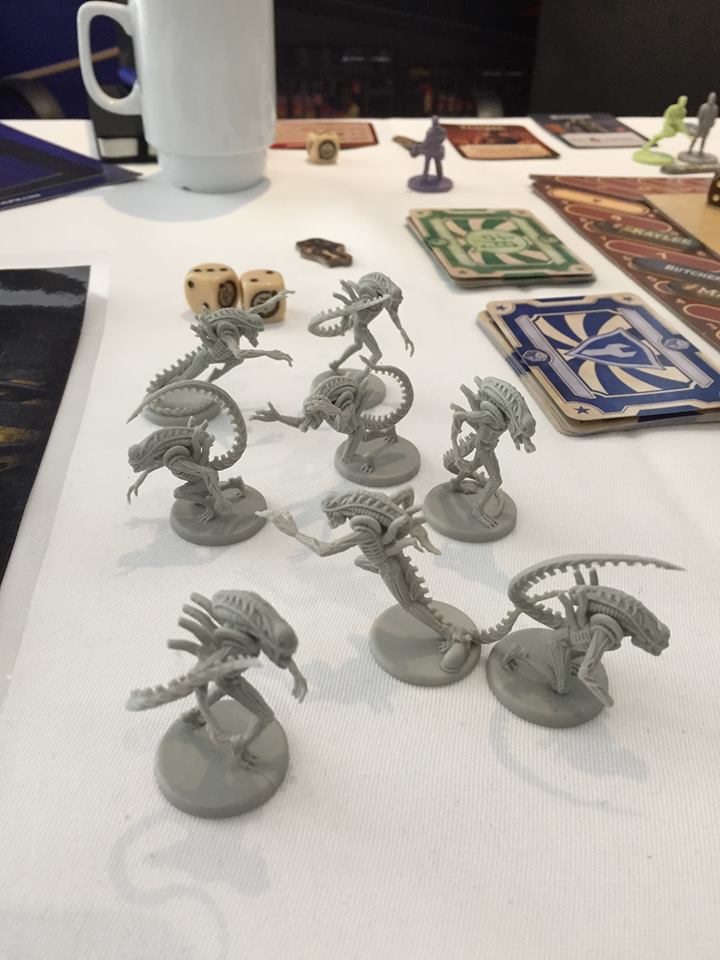 Other than that, new information on this game has been hard to find but I came across some images of what are most certainly character cards and what appear to be event cards: 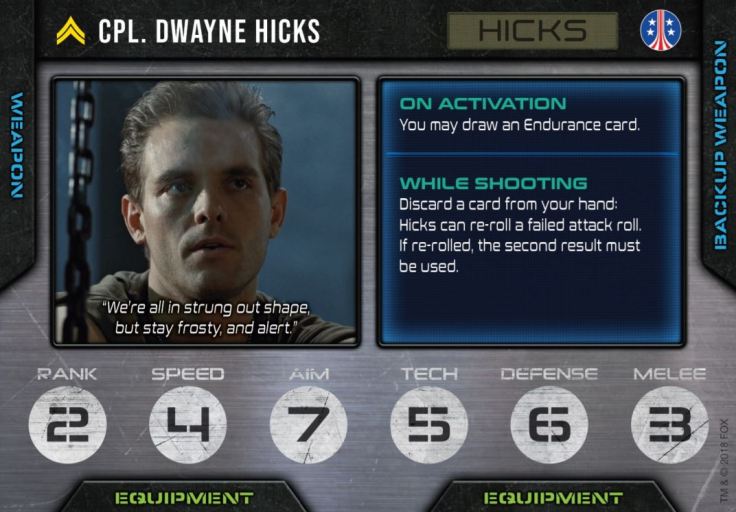 That’s all I’ve got at the moment.  Feel free to add your comments or theories below.

I’ve found a few new pictures of the minis.  They look good and it’s cool to see the Pulse Rifle, Smart Gun, Flamethrower, etc.  Hopefully the game is just as cool!

There still isn’t much info about this game but John-Paul from Gale Force 9 discusses it briefly here at about 30:45.

If you don’t want to watch the video, here are some important notes:

I’ll try to keep updating this page as new information is discovered.  Now back to my initial preview…

As my loyal readers know, I’m a huge fan of the Alien franchise so this is pretty exciting news. At the moment, there isn’t much information available about the game other than it’s a co-op miniatures game, it’s scheduled for release in September of this year, and it’s being released by Gale Force Nine.

That doesn’t provide me with much incite.  I would’ve preferred a ‘one vs many’ game because I always prefer direct conflict to co-op games, but I’ll make an exception for Aliens.  I’ve also never played a game from Gale Force Nine so I have no experience with the quality of their work.

That being said, I’ll probably buy it no matter what as the Alien universe is sorely lacking when it comes to board games.  To my knowledge, there only some dated 80’s games, a deck-building game, and an AVP collectible miniatures game.

None of those are what I want from an Alien game.  Based on the limited news so far, what I’d like to see is a dice-chucking, campaign-style, dungeon-crawl with lots of missions and modern board game mechanics… and of course face-huggers, chest-bursters, Alien queens, acid blood, overwhelmed marines, turret guns, motion trackers, and plenty of opportunities to yell my favorite Aliens quotes:

“They’re coming out of the goddamn walls!”

“Why don’t you put her in charge!”

“They mostly come out at night… mostly.”

“Game over man, game over!”

What would you like to see from Aliens the Board Game?

Outside is Overrated Home Page

The finest hippo that money can buy.

4 thoughts on “News: Aliens Board Game Scheduled for 2020 (but who knows at this point?)”